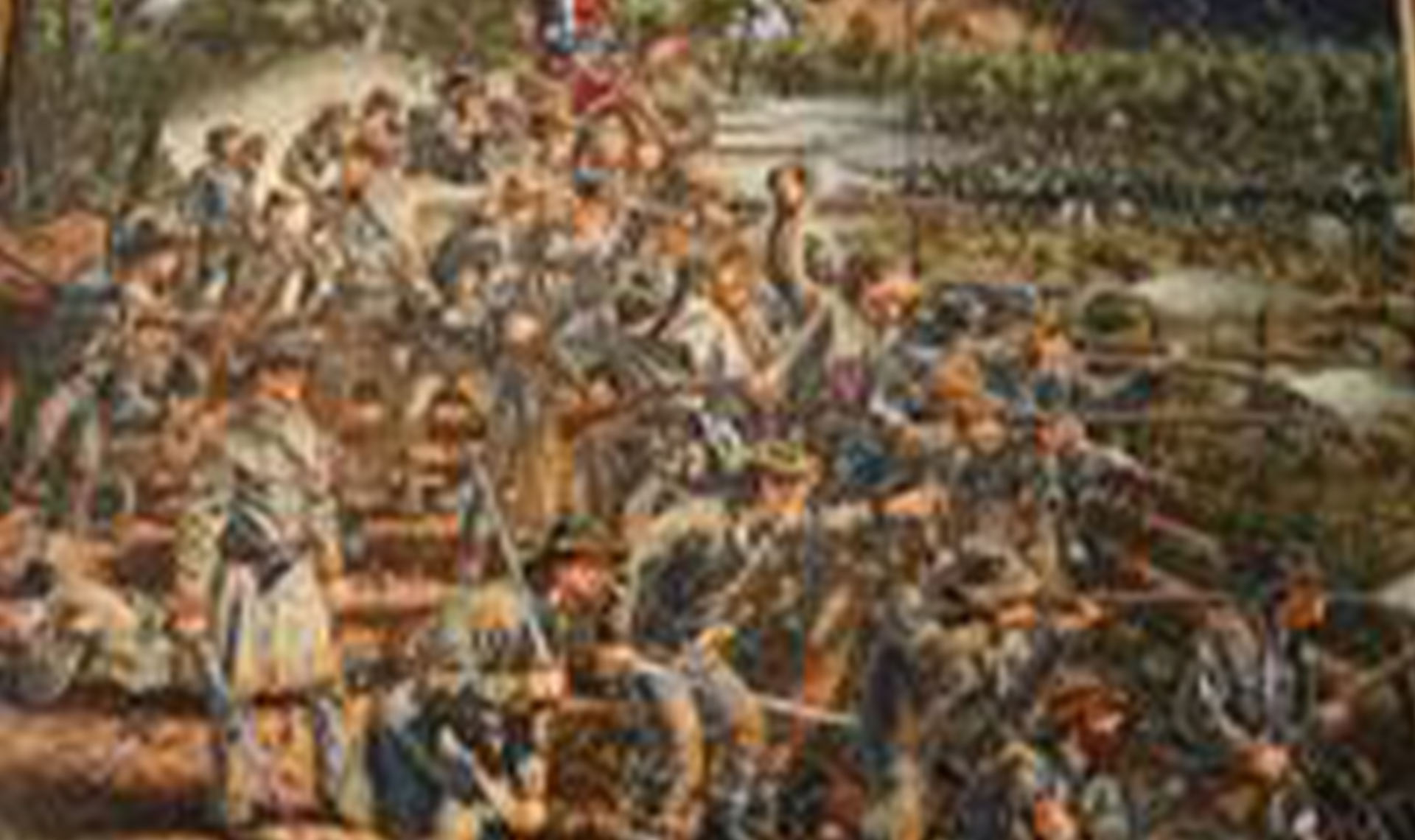 Atlanta Culture: Take a stirring journey through time in Atlanta’s Cyclorama. Sit at the center of a sweeping panorama of the Battle of Atlanta, fought on July 22, 1864, during the American Civil War.

On that day Confederate troops led by General John B. Hood made a desperate attempt to save Atlanta from the encircling Union armies. They were initially successful, but the Union troops, led by Major General William T. Sherman, regained positions lost earlier in the day and won the battle. By nightfall, more than 12,000 soldiers were killed, wounded or missing.

The Cyclorama painting – 42 feet tall and 358 feet in circumference – is said to be the largest painting in the world. It offers breathtaking realism enhanced by a foreground of three-dimensional figures and terrain. The presentation is accompanied by music and narration, available in five languages.

When you visit the Cyclorama in Atlanta’s Grant Park you can also see artifacts of the war displayed in the Civil War Museum and a steam locomotive known as the Texas, a veteran of the Great Locomotive Chase of 1862. Atlanta Culture: The High Museum of Art, founded in 1905 as the Atlanta Art Association, is the leading art museum in the Southeastern United States. Located in Atlanta ‘s Midtown arts and business district, the High has over 11,000 works of art in its permanent collection. The High’s first permanent home came in 1926 with the donation by Mrs. Joseph M. High of her family’s residence on Peachtree Street. In 1955, the Museum moved to a new brick structure adjacent to the old High house. After 122 Georgia art patrons died in a plane crash on a Museum-sponsored European tour in 1962, the Atlanta Arts Alliance was founded in their memory, and the Atlanta Memorial Arts Center opened in 1968, constructed around the existing Museum. In 1979, Coca-Cola magnate Robert W. Woodruff offered a $7.5 million challenge grant to build a new facility; Museum officials matched and exceeded the grant, generating a total of $20 million. Atlanta Culture: The Martin Luther King, Jr., National Historic Site includes a number of facilities that are operated in partnership with the National Park Service, Ebenezer Baptist Church and The King Center. Within these facilities the visitor can learn about Dr. King’s life and and his influence on others.

The Peace Plaza is the area between the National Park Service Visitor Center and Auburn Avenue. The focal points of the beautifully landscaped plaza area are the Martin Luther King, Jr. “I Have a Dream” World Peace Rose Garden, which includes inspirational messages of peace composed by students from local Atlanta schools, and a flowing water fountain. Also located in the plaza is the “BEHOLD” statue.

The GPS Ranger is a self-guided multimedia device that guides you through the historic Sweet Auburn Area. Hear Dr. King’s message of social justice and equality, view images of the civil rights movement, and experience the aftermath of his untimely death, all in the palm of your hand. This device also provides an alternative to visitors who are unable to take the tour of the Birth Home during high visitation. Atlanta Culture: The Millennium Gate is a classically-styled monumental arch located inside Atlantic Station in Midtown Atlanta, historically called “The Gate City.” The Gate is designed in the tradition of classical Roman triumphal arches that have been built around the world over the past 2,500 years. The Gate houses a 12,000 square foot museum that narrates Georgia’s and Atlanta’s history through interactive technology, film, and exhibitions. Atlanta Culture: We invite you to visit the Atlanta History Center, located on 33 acres in the heart of Buckhead. The History Center includes one of the Southeast’s largest history museum; two historic houses including Swan House and Tullie Smith farm; Centennial Olympic Games Museum; historic gardens; and the Kenan Research Center.