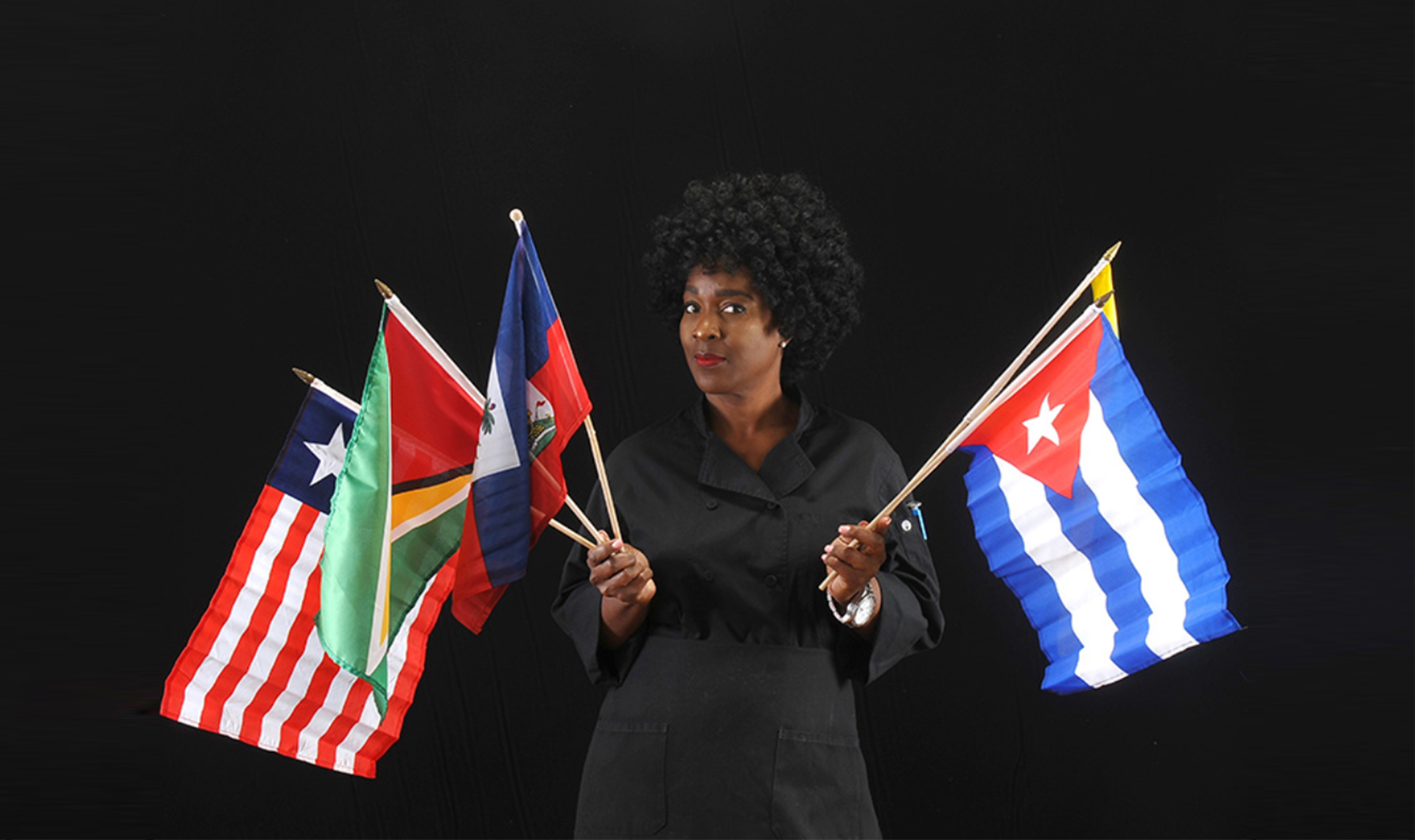 Culinary Excellence From The African Diaspora

A first-generation American of African and Caribbean descent, Chef Cynthia Chea Péan focuses on nutrient-dense, disease- fighting cuisine featuring ingredients, techniques and flavors of the African diaspora. As an avid traveler throughout Africa, the Caribbean and the United States, she takes every opportunity to expose herself to native foods and local traditions, adapting her recipes to honor the history and communities behind them.

Péan strives to bring awareness to the African American community of how to incorporate more plant-based foods into daily eating. Her creations provide an informative, warming, energizing and palate- surprising experience all at once.

Monarch Magazine: How did your journey to become a chef start?

Chef Cynthia Chea Péan: I was an executive director of a nonprofit in Los Angeles. The 2008 recession hit, and the organization lost its funding, and I lost my job. Began interviewing for any and everything— literally interviewed with Madonna in her New York City brownstone to run her organization Raising Malawi, the next day was back in LA filling out applications for my local Starbucks. No matter what I did, where I applied, nothing happened. Cooking had always been a passion of mine, something I was naturally good at. Around that same time, my church was looking for a volunteer to run their dining ministry. When asked, I thought to myself, ‘I’ve got nothing else to do. Why not?’ I discovered I loved the challenge of creating menus, balancing budgets, cooking for large numbers and, most of all, I loved seeing people enjoy my food. I did that for a couple of years and then decided I wanted to get paid for what I was doing. I went on Craigslist and looked for private chef jobs. I applied to one in Beverly Hills, did a cooking audition and got the job. I stayed there for two years. Monarch Magazine: What made you decide to take the approach of educating through taste buds?

Chef Cynthia Chea Péan: I love the concept of my cooking becoming one with my client. Think about it—when you cook a meal that is eaten, it becomes a part of them. Food is life. I want to contribute to the health and longevity of people, not their death.

Monarch Magazine: Were there hurdles when you began your mission?

Chef Cynthia Chea Péan: Getting that first opportunity to do your thing. Getting your first paying gig that you can actually support yourself with. The chef world is either feast or famine. Keeping those in-between times is an ongoing challenge. When I was offered my first paying gig at a restaurant after interning, I was hired as a chef manager. When they told me what my hourly rate was, I was shocked. I was told I was getting more than everyone other than the Executive Chef. Fortunately, I am married, so the sting of the shock wasn’t as bad as it could’ve been.

Monarch Magazine: What are some benefits of adopting a plant- based diet?

Chef Cynthia Chea Péan: As I mentioned earlier, what you eat becomes one with you. If you eat healthy foods, you will have clearer skin, increased stamina, vibrancy, strength and overall health. For men, it often results in increased and longer-lasting erections. Individuals who adopt a plant-based diet tend to lose weight upon transitioning, and maintaining one’s weight is easier when following this path. When you eat processed foods, fatty foods, meat, and dairy—they contribute to decreased stamina, lowered libido and overall decreased health. Your body responds best to whole foods, plant-based foods, fruits, vegetables and grains. Your body takes what it needs from those foods and gets rid of the rest. When you are eating processed foods packed with sugar, salt, preservatives and animal protein, your body takes excessive time to break it down, metabolize it and digest it. The cholesterol from the animal protein builds up in your arteries, sugar causes spikes in your insulin levels, salt contributes to hypertension and preservatives can cause headaches, palpitations, allergies and even cancer.

Monarch Magazine: Do you believe the African-American community is effected differently than other communities by our choice of diet?

Chef Cynthia Chea Péan: Absolutely! The diseases that overwhelmingly affect and are killing our communities are all linked to diet. Diabetes, hypertension and heart disease are all linked to what we eat. Our communities are overrun with fast-food restaurants, liquor stores, corner stores and vendors that are all cheap, quick and preservative and processed-food heavy. Convenience is killing America and African Americans are on the frontline. In addition, “traditional” foods of the African American experience are based on foods slaves ate, foods that were heavily salted and sweetened, fried and preserved to make it palatable. Fried chicken, macaroni and cheese, greens with salt pork, chitlins, buttered cornbread and fried fish are foods that give us comfort and remind us of our mothers, grandmothers, special occasions and Sunday dinner. These comfort foods are killing us, one bite at a time. So is shellfish. Our people love us some shellfish. It’s actually not the healthy alternative that we like to believe. It’s actually high in cholesterol.

Monarch Magazine: Do you believe that poor diets are caused by a lack of education, understanding or lack of resources?

Chef Cynthia Chea Péan: That’s some of it, add in a good helping of lack of access to healthcare and the challenges of surviving. Those that capitalize on our dollars don’t want us to know better. The cheaper their costs of food, the greater their bottom line profits. Many of our communities are in survival mode. So, fresh fruit and vegetables often don’t make the cut. We look for things that will either stretch and won’t spoil quickly or are cheap. I lived in Leimert Park in South Central LA for five years. There was one grocery store and the produce sections left much to be desired. Once the area started gentrifying, there were better choices and more quality items in the stores. Our people encounter numerous challenges daily—sometimes we want nothing more than a meal that comforts us. These foods are quick and fast, salty and sweet. And, by the way, food companies spend hundreds of millions of dollars on creating foods that are formulated to be addictive. Ever wonder why you can polish off a family size bag of Doritos? It’s all part of their plan.

Monarch Magazine: What steps should we take, to begin eradicating the popularity of unhealthy eating?

Chef Cynthia Chea Péan: It all starts at the community level. 1. Partner with community organizations and have food fairs and tastings where people can try alternatives to the unhealthy foods we are used to eating. 2. At these same events have “show and tell.” Put people in front of the community that can share their experiences in adopting a plant-based diet. 3. Community farms would go a long way. Again, partner with community organizations and create community farms in available lots —providing inexpensive and accessible fresh fruits and vegetables. Start community co-ops.

Monarch Magazine: What parts of Africa inspire your dishes?

Chef Cynthia Chea Péan: All over. My stepmother is from Tanzania and East Africans have a decidedly different style of cooking than their Western counterparts. I love Ethiopian food—their spices are so complex. West African food is my soul food. As the young people say, “it just hits different.” My father is from Liberia, West Africa. However, my mother was from Guyana, so, I am equally influenced by her country, which is a mosh of African, East Indian, British, Portugese and Chinese cultures.

Monarch Magazine: Do you believe that African and Caribbean diets are healthier than traditional American diets?

Monarch Magazine: What are some signature dishes that you can share to get us on the path of a plant-based diet?

Chef Cynthia Chea Péan: One of my favorite dishes to prepare is braised greens. My greens are a mixture of finely sliced kale and collards. They are prepared with garlic, celery, onions, bell peppers and a touch of palm oil. Rather than cooking them for hours, I stir fry them for about 10 minutes, add a little vegetable broth and steam them for five minutes more. That’s it! There’s more texture because you haven’t cooked it to death and by cooking it this way, all the nutrition isn’t in the water—it’s retained in your greens, and it’s heartier and more substantive.

Directions:
In a large pan, over medium/high heat, warm the oil until it glistens. Add in onion, bell pepper and celery and cook for 3-4 minutes.
Add garlic, tomatoes and smoked paprika. Cook for 3-4 minutes.
Add in half of the collards and half of the kale. Toss it around in the pan until the greens begin to wilt (about 5 minutes).
Add in remaining greens; cook for another 5 minutes
Add in 1/8 cup broth and cover. Allow to steam for an additional 5 minutes.
Makes 3-4 servings. The interview has been edited for length and clarity.