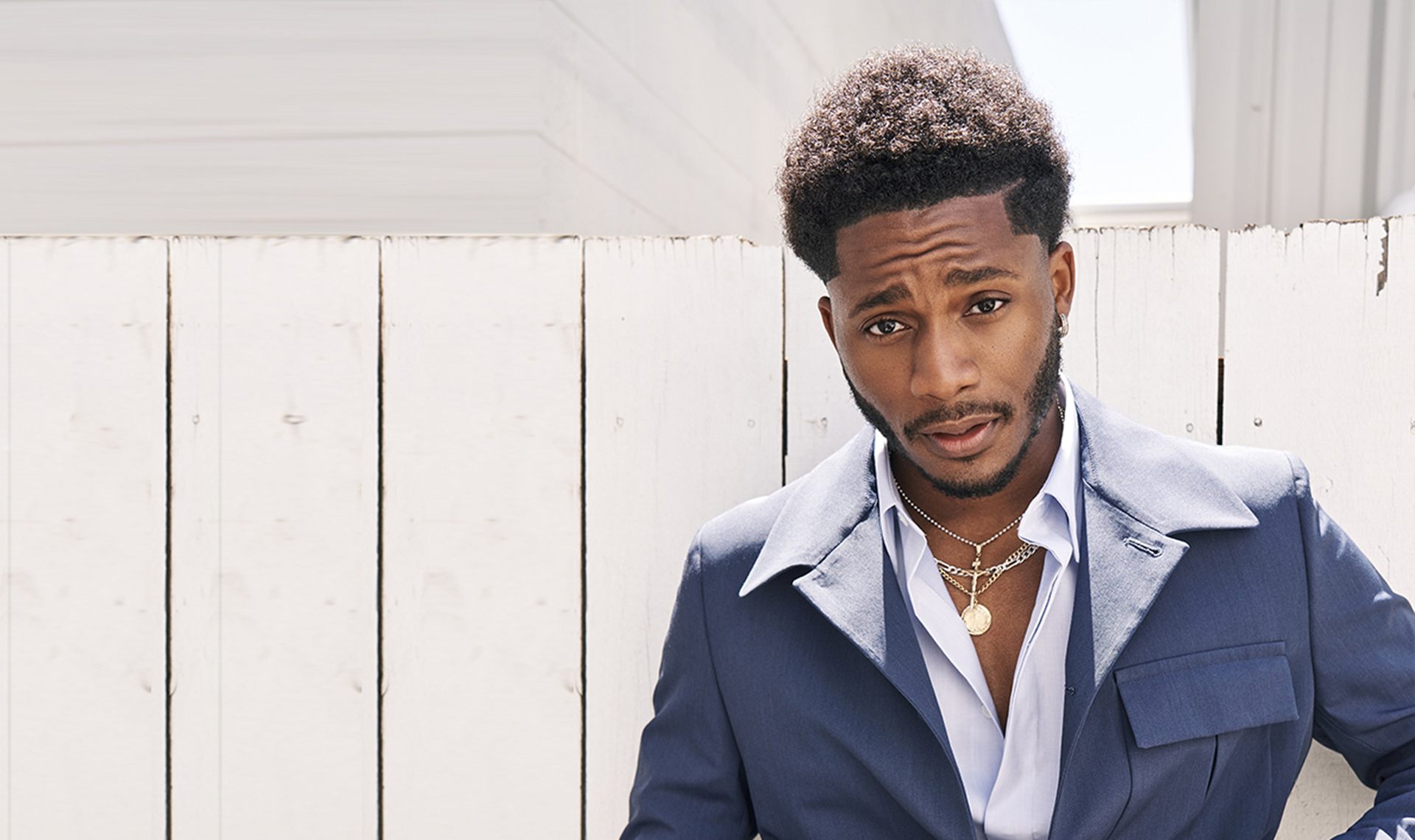 Da’Vinchi, born Abraham D. Juste, is a Haitian-American actor with magnetic charm. Starting his career in NYC as a spoken word artist and rapper, he quickly fell into the acting realm. Studying the craft under one of his mentors Marc John Jeffries, Da’Vinchi booked Marvel’s Jessica Jones followed by a recurring role on ABC’s hit show Grown-ish right out of the gate. Da’Vinchi has proven to be a future prominent force in Hollywood playing alongside Ben Affleck in The Way Back, guest starring in the CW’s popular sports drama All American, and signing to one of the top agencies in the business, APA, all in just under 2 years. Da’Vinchi has a passion for philanthropy and plans on using his platform to help youth find their purpose and identify their gifts.

MONARCH MAGAZINE: You have an incredible range as an actor. For our listeners, please share some of your background and how you can career began.

Da’Vinchi: When I started out, I was training in New York for 2-3 years at a small acting school. I started doing that and was doing music at the same time. Then, I came out to LA and met a manager on the theatrical side, she said, “I’m willing to work with you”. I got an agent and right after that booked Marvel Jessica Jones. Right after that, I thought “I made it”. Afterwards I tested on some things and booked Grown-ish and that was my first real project that got me notoriety. That was very exciting, and I was nervous and didn’t know what to expect since I was very fresh and new. The rest started slowly unfolding. Every year I was testing and booking series, I was on a roll.

MONARCH MAGAZINE: It sounds like coming from music, you then got to LA and made a huge splash in the industry. As far as acting, it sounds like you belong, like you feel at home now.

Da’Vinchi: 100%. And this is a step to help me get to my home. Acting is part of it but acting is a small piece inside of a big picture.

MONARCH MAGAZINE: Did you ever imagine portraying someone from the BMF family?

MONARCH MAGAZINE: How did this role come about?

Da’Vinchi: I had an audition. I was attached to another series and up for another project during that time, and I saw this and read the character and said, “I like this, this character – I can relate to this character”. I auditioned and felt like I murdered that tape and went straight into testing and I remember November 11 – 11/11 – my agent called and said “today’s 11/11 make a wish”, and I said “I wish I got BMF” and he said “you got it”. It was very exciting. I shut my phone off for two hours and went to the mountains and thanked God, because this business is hard.

MONARCH MAGAZINE: Were you familiar with the BMF and how influential they were in influencing hip hop culture and its lifestyle? 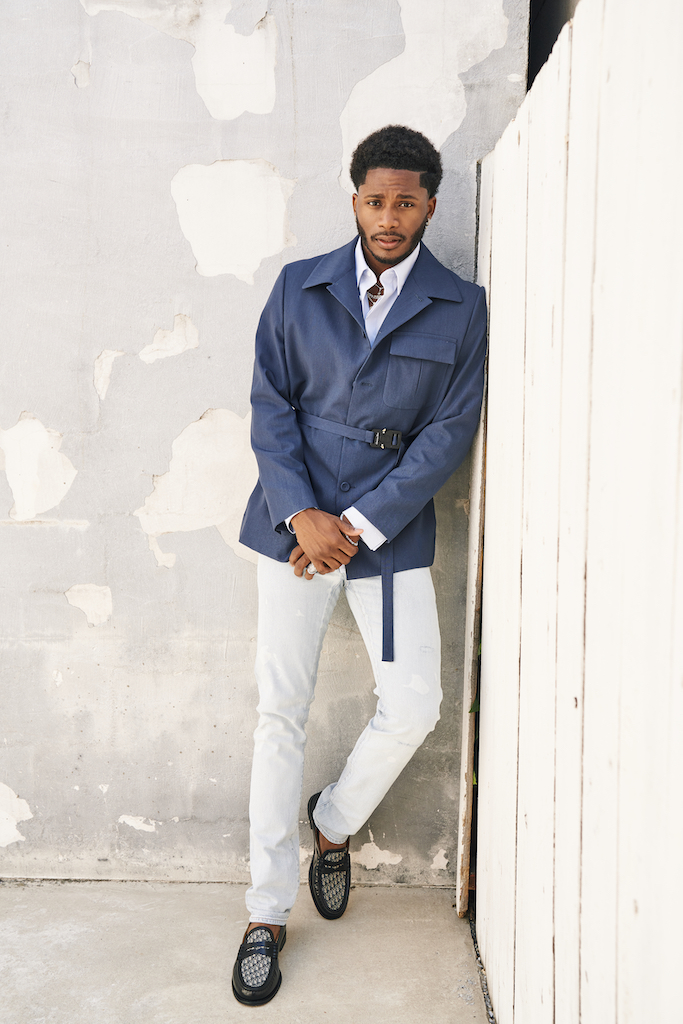 Da’Vinchi: I was familiar with them; people made a lot of references to them in songs. We heard it a lot, but to me they were mythological creature, like OG drug lords that everyone wanted to be like, and I never really knew much about them until booking this – I didn’t really know who Southwest T was. Back then, when they were taking over, social media wasn’t around, so they were just like Big Foot, and now, after doing my extensive research on this project when I really dove into and studied all of it and had conversations with them. That changed my whole perspective on them because now I actually understand a lot more than I did before.

MONARCH MAGAZINE: Tell me, where are you from?

Da’Vinchi: I’m a first generation Haitian-American from Brooklyn. I’ve lived in Brooklyn, in Jersey, and did high school and college in Florida and then moved back to New York.

MONARCH MAGAZINE: What did you get your degree in?

MONARCH MAGAZINE: I’m pretty sure you use some of those skills in this movie. Within the culture, BMF is as infamous as Al Capone, John Gotti, or other well-known crime figures. What is the process of getting into these characters?

Da’Vinchi: The research I did was great. I studied the music during that time – a lot of techno which is now called house – no rapping over the beats, just a lot of sounds. I watched Goodfellas, The Sopranos, different things to get into it. I really tapped back into my childhood because the poverty and circumstances they were in were very similar to the circumstances I was in being raised by my mother. My mother was raising five of us in the house, and my grandmother was there, she doesn’t speak English. My mother was working 24/7, and we basically roamed the streets. I was the baby boy and followed everything my older brothers did, so I really tapped back into that side. Because of how I carry myself, a lot of people think I had this life that was peaches and cream. But no, no. I went to court at 13 and had to get my record expunged. I wasn’t the nicest kid growing up. I definitely changed and matured when my environment changed and my father pulled me out of the streets and made me live with him in Florida. That’s what really changed everything. So, I dove back into my past and studied more about the ‘80s and talked with everyone around me giving me information and used all of that and just dove in.

MONARCH MAGAZINE: Did you talk to Terry or Meech? Tell us about that conversation.

Da’Vinchi: I talked to Big Meech and Terry. When I talked to Big Meech on the phone I was asking him about stories about their life and hustles and asking them to tell me. They had a bond like no other. They really wanted to make it out, because of the poverty, which was unbearable – the kind when you can’t afford new shoes and walking outside with holes in your shoes makes you think differently. I talked to Terry. He’s very organized, all business, straightforward. Meech is more the charismatic, smooth talker. Terry is boom, boom, boom direct. And you hear it in his voice. They gave me some good pointers about their family dynamic and things like that to really embody the character.

MONARCH MAGAZINE: Did you learn anything that changed yours or the world’s perspective of BMF?

Da’Vinchi: For sure. I didn’t know they were funding kids to go to college, helping people start businesses, they were trying to good with the resources and money that they had. They weren’t the typical type of gangsters that just were wild. They really were organized and disciplined. Although they both were serving 30 years (they released Terry early because of COVID) but none of them were locked up for murder charges. Because that’s not what they were about. They were just defending themselves and standing their ground. They really had heart and compassion. They weren’t the typical gangsters partying who made it by accident. They planned it and were methodical. That’s what makes this a little less typical than the typical Black drug dealer story.

MONARCH MAGAZINE: How do you think this will stand up to the typical crime stories, like The Wire or Goodfellas or any of the other well-known crime drama stories?

Da’Vinchi: I think a good portion of humans are jaded by drug stories, but this is a true story and these guys were so influential in hip hop culture and a lot of other drug dealers weren’t. These guys also ran one of the largest domestic drug distributions in the history of America. They broke records on both the urban side and in crime. What they did, it’s historic. When people watch this story, if it’s taken in from the right light, you’ll be able to see how attitude reflects leadership. I think the people on the top are no different than Meech and Terry but maybe are ten times worse and the things they do don’t compare to what civilians do on a small level. Sometimes we get to a certain point and there’s no other way. Meaning, if I take the proverbial route and only make $50,000 a year… then what? I think you can sympathize and see that. There’s a lot of compassion there. This story humanizes that. Terry was conflicted with school and he had a baby on the way. They were trying to battle the streets. It will definitely be up there with those other shows.

MONARCH MAGAZINE: It sounds like these weren’t the typical drug dealers but that they had an influence on music and hip hop culture. But the thing I hear the most of all, it sounds like this project is more about family. Is it about family, drugs, or gangsters, or all of the above?

Da’Vinchi: It’s definitely all of the above, because everything is in there.

MONARCH MAGAZINE: What is the most important component out of those three?

Da’Vinchi: Family, for sure. That’s why they were able to have so much success and do it so large – it’s family and through that family tie they had structure.

MONARCH MAGAZINE: Where do you think the BMF and the brothers would be if they had successfully transitioned into the music industry?

MONARCH MAGAZINE: What’s next for you?

Da’Vinchi: I’m getting ready to head to New York and go do Broadway for the next four months. That project is called Thoughts On A Colored Man. I’ve never done theater on this level before and I’m excited to push my acting chops because it’s going to give me a whole other range, and I’m going to learn from all the other great actors that are a part of this project. At the same time, there’s a project that I’m working on because I want to get into producing and directing so there’s something that I’m writing. That’s what I work on in my down time.

MONARCH MAGAZINE: How do we stay in contact with you?