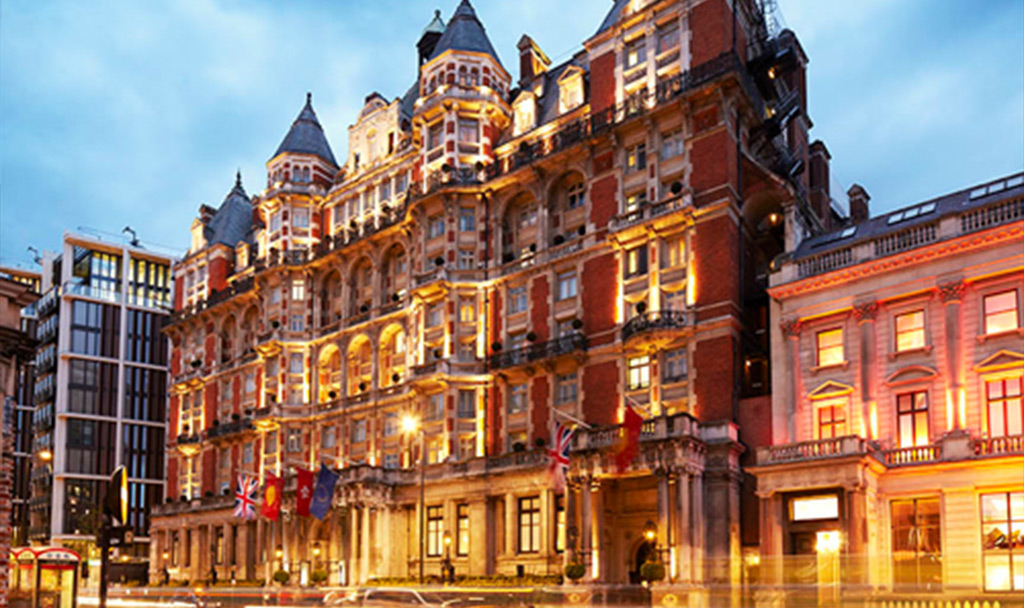 Been all over the world and good old London never disappoints. With its incredible history, award-winning restaurants and luxurious accommodations, London is worth the trip over the pond. After a very long flight from Cancun (don’t ask) we arrive in rainy and cold London. My assistant Gus and I had to shoot a famous British football player for Hugo Boss. Our shoot was in Manchester, so we opted to stay in London and take the train to Manchester. We decided to stay at the Mandarin Oriental for the first two nights. I rang my pal Sarah (director of communications at the fabulous Mandarin Oriental London) and she set us up with the most incredible stay. Upon our arrival she booked me in for a relaxing massage and facial at the Mandarin’s tranquil spa. It was so incredibly relaxing and exactly what I needed after the fourteen hours of traveling to get there.

My suite was so comfortable and had the best view of Hyde Park. I felt like I was at home and was content sitting in the room and watching Downtown Abbey. Needless to say, my assistant Gus would not allow that. He had me seeing every museum and taking the trains to quaint English towns. I have to say it was well worth it.

After the most relaxing night sleep, we were up at 6:00 a.m. to catch a train to the quaint town of York. It is well worth the train ride. A city circled by thirteenth century walls (yes a walled city) and charming narrow streets. It is like stepping back in time. Fortunately it has not been ruined by American chains as of yet. I think there is only one McDonald’s.

There are so many incredible things to do and see in York. There are many cool local stores that have great clothing and artwork. The Minster, one the largest Gothic cathedrals in Northern Europe, is a must see. It is pretty much unbelievable. I was so humbled by its history and architecture. Be sure to walk the winding staircase to the top of the tower. It’s quite a walk but well worth it. To learn more about York go to http://www.visityork.org

We toured around London and visited with my friends Gina and Mel. They took a train up from Brighton to have lunch with us at Bar Boulud at the Mandarin. As to be expected the food and service was top drawer. We then hopped a cab to experience, The Tower of London: so cool! It is a must see. You can also see the Tower Bridge, which is directly across from the Tower of London. After a fun day of sightseeing we met our friend Sarah for an incredible dinner at Heston Blumenthal’s incredible restaurant. What a credible experience it was!

We decided to experience another London landmark, The Savoy. We packed our stuff and headed over to another British icon, this one dating back to 1889. After a 100 million pounds (not dollars, pounds) renovation, the hotel is seamless. The hotel is located on the River Thames which is the most gorgeous backdrop. It is conveniently located to so many of the museums and monuments. I decided to splurge and check in to a one-bedroom suite. I was so blown away when I entered the suite. It was sleek, modern and quite glamorous. The suite still had the stunning English Edwardian style but was revamped with modern Art Deco elements. The bathroom had heated floors!

After settling in our amazing suites we headed down to The Thames Foyer to have some of the world famous Savoy Tea. I love tea, so this was such a treat to have a traditional afternoon tea in England: at the Savoy no less! We were now headed to see the charming Royal Borough of Kensington. I love Kensington. So many chic pubs and quaint stores, I think if I had to live in London I would choose to live there! Of course no trip to London would be complete without a trip to Kensington Palace.

After a fun filled day of exploration, we settled in for an incredible dinner at Gordon Ramsay’s Savoy Grill. As to be expected the food did not disappoint!

Our London trip was way too quick. We did go to Manchester for a couple of hours but honestly, there are so many more incredible places to see other than Manchester. Both the Mandarin Oriental and the Savoy are the two best options in London for accommodations. Each is so special in its own way. I love the old English feel of the Mandarin Oriental and the sleek modern twist of The Savoy. I think I will have to stay at both every trip to London!

10 More Great Things To Do and See in London:

#2 Experience the essential introduction to London aboard the original hop-on hop-off sightseeing tour. You’ll see all the magical sights of London in a comfortable and secure environment, above the crowds at street level aboard the open top buses. Get a unique view of all the sights with full commentary provided. It’s very fun!

#3 Take a London Morning Tour. To commemorate the Royal Wedding of Prince William and Kate Middleton, your London morning tour will follow the route that the Royal Wedding Procession took on April 29, 2011 from Clarence House to Westminster Abbey. See the famous Changing of the Guard ceremony outside Buckingham Palace, and then spend the afternoon exploring London at your leisure.

#4 Gear up for the 2012 Olympic Games on this exciting bike tour! Cycle out to the site where the main events of the London Olympics will take place in summer 2012. On the way to Olympic Park, see famous London sights such as the Tate Art Gallery, Shakespeare’s Globe Theater and Tower Bridge. During your tour, your guide will talk you through centuries of London’s exciting history, as well as the excitement surrounding the Olympic and Paralympic games and their significance for London.

#5 This is my favorite! Take a trip through the English countryside on a day trip from London to Stonehenge, Bath, Stratford-upon-Avon and the Cotswolds. You’ll combine vibrant history, gorgeous scenery and sightseeing at some of Britain’s most popular attractions. Your tour includes an exclusive visit to Shakespeare’s birthplace, with champagne and strawberry scones served in his picturesque garden. Bring your camera, it is just incredible! #6 Put on your finest tweed suit and take a London Thames River dinner cruise. Breathtaking views, relaxing atmosphere, a four-course meal and after-dinner dancing: what more could you ask for? A Thames River dinner cruise is the perfect indulgence, from the welcome cocktail you’ll receive when you step onboard, to dancing cheek to cheek on the dance floor after dinner.

#7 This is great for the music lovers. This is the ideal way to discover London’s rock music history. Choose either the morning or afternoon tour, or book them both for a comprehensive London Rock Music tour. These small group tours (maximum sixteen people) cover everything from rock ‘n’ roll landmarks in Bohemian SoHo to the north London neighborhoods of Camden Town, Hampstead Village and Heath, Muswell Hill, Archway and Islington.

#8 Get ready to get scared! Take the Jack the Ripper tour and the London Ghost Walk. See the sinister and ghostly side of London as you follow the blood-soaked footsteps of murderer Jack the Ripper down gas-lit alleyways on a walking tour of London that will have you trembling with fear!

#9 This is just a must see. Get your tickets for one of the most popular West End musicals of all time: Billy Elliot! With music by legendary songwriter Sir Elton John, this brilliant musical is an adaptation of one of the most adored British films of the last decade.

#10 Last but certainly not least, venture out to explore beyond the boundaries of London. London is fabulous, of course, but you don’t want to leave without exploring the English countryside for at least one day. Head southwest of London to the picturesque, historic sites of Leeds Castle, Canterbury Cathedral and Dover. On your way, you’ll drive through Greenwich, home of the Royal Observatory and the Prime Meridian, where the world’s time is set. When you reach Leeds Castle, you’ll enjoy a private viewing of this glorious twelfth century castle before the doors open to the public. You’ll then visit famous Canterbury Cathedral and see the White Cliffs of Dover.

London is very expensive. Use your credit card and let the credit card companies do the exchange rate for you.

Watch the cab drivers. You thought NYC was bad, they are just as shady.

Although they say they don’t expect the usual 15 percent tips on food and beverages, they do. The second they hear you say you are American the expectation is there.

Bring a raincoat. It rains so much.

Buy a tube pass (subway); it is much cheaper than cabs and very easy to navigate.

If you are leaving London to explore, purchase your train tickets online prior. The trains leave at different times and some time slots are much less expensive than others.

Don’t fly into Gatwick. It’s a fortune to take a cab from there to London and takes forever. Fly into London Heathrow, it’s much cheaper and much closer.