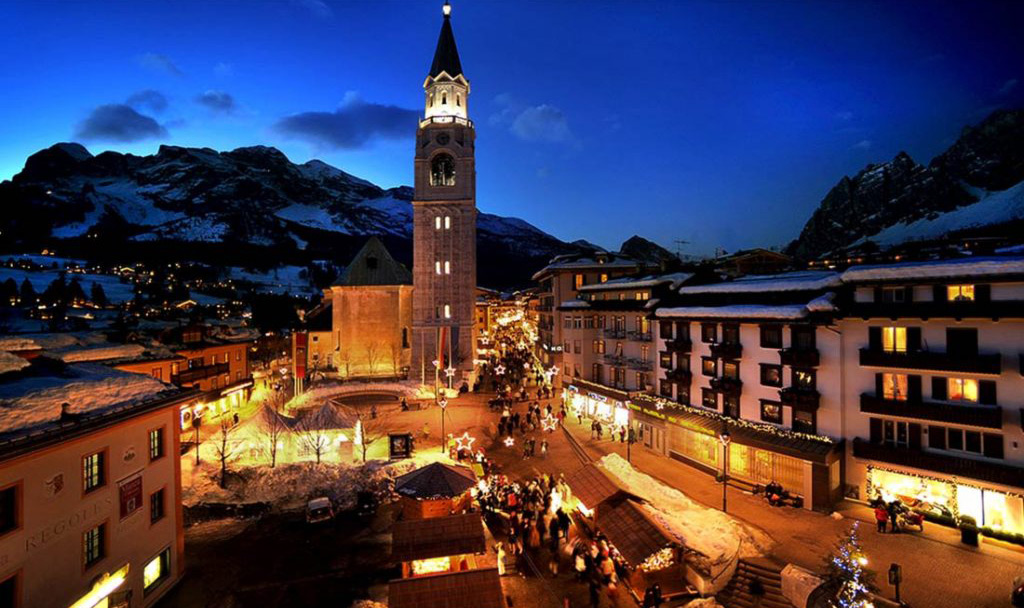 WARNING:
“Beware of avalanches, bedazzled helmets, and Metallic Jimmy Choo moon boots.” Maybe you won’t encounter this warning sign at trendy ski resorts such as Courchevel in the French Alps and St. Moritz in Switzerland, but that doesn’t mean these dangers aren’t lurking. With celebrities, royalty, and Russian billionaires clogging some of Europe’s most pristine slopes—resulting in lift lines overrun by stick-wielding selfie poseurs and abominably dressed snow men—a long weekend in Lech, Austria, can start to feel more like a bad episode of The Real Housewives of Vorarlberg.

That’s why the preferred destination of glitz-adverse skiers has long been Cortina d’Ampezzo, the timeless town in northern Italy once favored by Ernest Hemingway and Frank Sinatra, and frequented today by George Clooney. Geographically, not much separates the mountain range from its better-known Alpine neighbors; technically, the Dolomites are the Alps. Psychographically, however, the range’s 18 limestone peaks are a world away—a winter paradise operating improbably on island time.

Cortina hosted the 1956 Winter Olympics and boasts one of the range’s steepest slopes—the vertigo-inducing 64-percent-gradient Forcella Staunies—but you won’t find any first to last chair bravado here. Many Italians don’t even set foot on the slopes until 11:30a.m., and even then it’s generally for a wine-fueled lunch at one of 48 rifugios, high elevation lodges that serve remarkably delicious food, considering their remote setting. (And menus feature as much spaetzli as spaghetti, thanks to Italy’s acquisition of the region from Austria in 1918.) For locals, a perfect bluebird day entails sitting on the terrace of the Michelin-starred El Camineto and filling up on casunziei, the region’s beet-filled ravioli, while taking in the view below. What’s left for the rest of us: quiet, uncrowded pistes throughout Cortina’s three main ski areas. In fact, crowds seem to form only at the local hockey games, played on the Olympic ice rink where Brigitte Bardot once took skating lessons, and along Corso Italia, Cortina’s pedestrian-only cobbled main street, which turns into a lively scene every day around 4:00 p.m. But rather than clubs touting celebrity DJs or bars full of blokes dancing on tables to oompah music, nightlife centers on restaurants such as Aga—a four table hot spot run by Alessandra Del Favero and Noma alum Oliver Piras, who serve foraging-based tasting menus—and intimate old-school wine bars such as Enoteca Cortina.

Even if your agenda is more “aprés” than “ski,” it’s worth waking up early to take on Mount Labazoui’s legendary Hidden Valley. Stretching nearly five miles, the valley’s storied ski run, the Armentarola, is considered one of the world’s most beautiful, and the relatively relaxed terrain means you can actually look up and enjoy the scenery without fearing for your life. But be warned: Accessing the Dolomites’ best slopes does require some maneuvering. You’ll have to take a 25-minute bus ride to the neighboring Lagazuoi lift, but then from there, you’re whisked to 9,300 feet within three minutes.

Before you descend, wander over to the adjacent Rifugio Lagazuoi to snap a photo on its terrace, which offers a 300-degree panorama of peaks. And, just this once, take a guilt-free selfie in front of the valley’s frozen waterfalls.

Eventually the run deposits you into a flat river valley above the hamlet of Armentarola, on the outskirts of the Alta Badia ski area. At any other resort in the world, you’d have to traverse the final mile, but Corina offers a uniquely primitive take on the classic T-bar: the horse tow. Grab the thick rope attached to a sleigh, pulled by an honest-to-god equine, and white-knuckle it with up to 50 of your fellow skiers. (Try not to be the guy who catches an edge and topples everyone like bowling pins.)

From Armentarola, ambitious skiers can access the lift system at Saint Cassiano and make their way to the famous Sella Ronda, a 25-mile circular loop of lifts and runs, or follow the locals’ lead and head to the Cinque Torri ski area for a two-hour lunch paired with a bottle of Valpolicella at Rifugio Averau. When the light starts to fade, make one final lethargic run to the bus stop. You should reach Cortina just as the town’s aprés celebration is heating up. Tonight you’re drinking an electric-yellow Bombardino, the region’s signature winter cocktail—a concoction of egg liqueur and brandy-spiked eggnog topped with whipped cream—and the requisite end to a day on the slopes. Sip your with pride, knowing you and your buddies may be the only ones in the bar who actually made any turns on skis today. How to do the Dolomites

Four experiences you can have only in the Italian Alps:

Ski the Sella Ronda
The Sella Ronda circumnavigates the flat-topped Sella Massif Ridge, creating a merry-go-round of lifts and downhill runs suitable for intermediate skiers. Start the 25-mile circuit by 10:00 a.m. and make a lunch reservation at Rifugio Emilio Comici in Val Gardena. (You’ll smell the garlic as you reach the top of the Comici lift.) alpineadventures.net; rifugiocomici.com

Take the Great-War Ski Tour
Often referred to as an open-air history museum, this 50-mile circuit winds around Col di Lana, the epicenter of the battles between Italian troops and Austrian forces during World War I. Between ski runs, take in bunkers, trenches, and artillery emplacements. Dolomitemountains.com

Eat at Restaurant St. Hubertus
Named for the patron saint of hunters, St. Hubertus sets the stage for Chef Norbert Niederkofler’s transformation of simple mountain ingredients into elevated dishes, such as beetroot gnocchi with beer soil and daikon cream. Rosalpina.it

Toboggan by Moonlight
If Clark Griswold taught us anything, it’s that sledding is not a pastime solely for children. Tackle five unique runs—some as long as four miles—after a meal at Chalet Alpenrose or Chalet Resciesa. A snowmobile gets you to dinner; a shot of schnapps gets you back down. Chaletpenrose.it; resciesa.com/en/