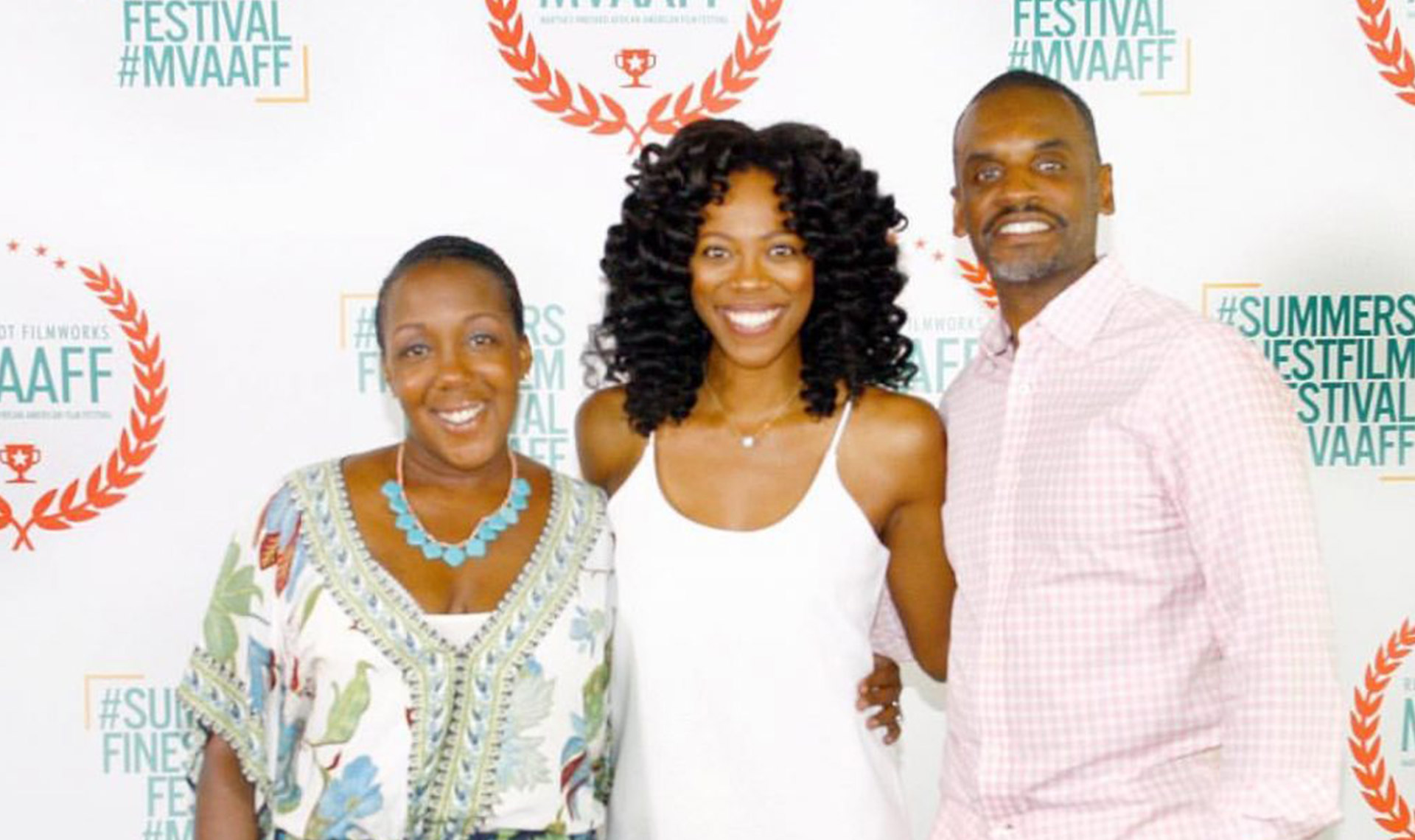 Case Study – A Spotlight On Success

From The Director's Chair

Floyd A.B. Rance III and Stephanie Tavares-Rance, Founders of The Martha’s Vineyard African American Film Festival (MVAAFF). One of their ventures Run & Shoot Filmworks was the recipient of the 2013 AdColor MVP (Most Valuable Partnership) Award for their partnership with Saatchi & Saatchi Global Advertising.

AdColor is the premier organization that celebrates and advocates diversity in the creative and technology industries. The organization also awards change agents in the area of diversity in advertising. We spoke with Floyd and Stephanie about their newest venture “The Color Of Conversation,” a series of screenings and discussions. Monarch magazine: What prompted you to begin Run & Shoot Filmworks?

FLOYD RANCE: I started this back in 2000. The progression for a lot of filmmakers is after they’ve worked in the industry for a while they settle down and start their own thing. It’s a small production company. Run & Shoot, it’s a sports acronym, we’re going to go small and go really fast. Filmworks is derived from the time I spent working over at 40 Acres and a Mule Filmworks. I consider that my “grad school” of my personal journey working there. I did a lot of work on the commercial circuit with numerous national brands. The intention was to do film production. My wife and I have been together since the early nineties. We collaborated and did many things together. The film work was me and my wife doing public relations and marketing.

Monarch magazine: Based on your qualifications and experiences this seems like the perfect match.

FLOYD RANCE: We both have disciplines in the field; it’s just serendipitous. It happened organically. Everything we experienced led us to this place and here we are sixteen years later. Monarch magazine: How do you feel about what seems to be a re-emerging of quality African American films?

FLOYD RANCE: Just like anything else, quality is subjective. The box office has accelerated and exceeded expectations in some instances. But there have been quality films since the very beginning.

Stephanie, you come from a magazine background with the legendary CODE magazine. How did that experience lead to creating MVAAFF?

STEPHANIE TAVARES-RANCE: My career started in the music industry; I worked with a lot of different artists in A&R. While there, I was doing events on the side. Floyd and I would do ski trips and they were a success! Then I was at EMI Music for ten years and they closed down. That’s the only reason I left. From there, I started doing artist management, which I hated. I didn’t like the management side of working with artists. That wasn’t my thing. There were different things that were always in the entertainment space. I worked for Martell Cognac and did a lot of events. CODE magazine was fabulous. All of that experience that I had sort of helped me to cultivate what we do on Martha’s Vineyard. I think everything led to this moment. When I was at Martell, we did an event on Martha’s Vineyard where we rented a horse, we had liquor, and someone brought films. I think subconsciously in the back of my mind, I thought I may have something here, there’s a need for something like this on the vineyard.

At that time, I was working at a PR firm and Floyd was working on a lot of different projects. One of the projects took him to Barbados and I went with him. The PR company I was working for was incredibly demanding; it was a small company. I was in charge of numerous accounts and working a lot of events. So I couldn’t do all of that and be a wife, and we were thinking about having kids; it was too much, so I left. So when I went to Barbados, I thought “this is great” because I always wanted to do events there. I reached out to the tourism board. Timing is everything! They were looking to bring more African Americans to Barbados. I pitched a bunch of ideas; one of those ideas was a film festival not having any idea of how to actually do one. They liked that idea – and that’s how it was born. Unfortunately, 9/11 happened. I had about two sponsors and ten films, but when 9/11 happened, they got scared and pulled out. We were like let’s just do it on Martha’s Vineyard – why not? That’s how the whole thing started. No big business plan, no blueprint…Martha’s Vineyard was plan B. Monarch magazine: As we are all too familiar with seeing, there are unfortunate occurrences that are happening with police relations between African American men and women, gun control, school shootings and so much more. So as it relates to images whether on screen or in magazines, how important do you feel the images we project affect the design of the community of the world?

FLOYD RANCE: The words we use and the images are very impactful. Words have power. The question is, is the virus controllable? That’s the question. Is there a remedy for that virus? Can we contain it and control it, because it’s completely out of control. It’s worldwide. You’ll always have enablers and people who can justify this language, the behavior, and these images for whatever reason. Whether it’s self-preservation or for monetization, you’re always going to have that. There are some taboo materials and topics that you have to seek out and dig and find it, whereas some of these other images and words are mainstream. The gun culture, speaking about women derogatorily, that is mainstream front and center. Whether you’re black or white, or any ethnicity, or household, those images and words are readily accessible and it’s normalized and accepted to a high degree. The lyrics and music are on the radio during drive time in the mornings with the kids. When I was growing up it wasn’t as vulgar, it was only played in the evenings. I can remember staying up until two in the morning just to hear certain music, having to record it so I could listen to it the next day. I had to make an effort to hear it. It wasn’t in fifty states. Everything has been monetized, the images, vulgarity. Again, is it containable? It’s out of control. We live in this shock and awe culture so everything has to make you go wow or say what? Every station or network is competing with each other for the highest shock and awe rating. It’s this “gotcha” culture—the edge of the envelope has been pushed so far it’s like everything is acceptable.

As it relates to our events, we receive things that are relevant to our society. What we try to do is make sure the story is being told well and it’s a good story. It’s not shock and awe. We look at the orator, what type of efforts are the actors making and is it sincere.

Monarch magazine: So how far out do you begin planning MVAFF?

STEPHANIE TAVARES-RANCE: About a year. When the festival wraps in August, after the Labor Day holiday, we start back up with submissions being open in October. We start the process all over again.

Monarch magazine: Initially, was it difficult to get others involved to support your vision?

STEPHANIE TAVARES-RANCE: No, it was needed. When we first started, it was before social media. I found out about a group called Black Film Makers at Yahoo. They would send their VHS tapes in the mail with a check for ten dollars back then. They didn’t know who we were. So we figured we have something here, there’s interest, and folks want this. As the film festival got momentum and credibility the films that were submitted got better and better. So it wasn’t hard at all. Floyd and I had friends in the entertainment industry who worked at different companies and they supported us. They believed in our vision, so we had support early on. As the festival grew more, sponsors came as well. From an attendee standpoint, it was love. People supported us. It became this family reunion, generations of families come to our events. STEPHANIE TAVARES-RANCE: We’re busting at the seams with the MVAAFF, which is good. The time is now to do another activation, why not do something in the DC/Silver Spring area. It’s one of my favorite cities. And we looked at the demographics of MVAAFF, a lot of attendees come from the DC/Maryland/Virginia area and of course NY, NJ, LA. It makes sense to try to grow a new child, birth a new baby with this venture. So we’re excited. It’s called The Color of Conversation, it’s starting June 28 at AFI in Silver Spring, Maryland. We’re very excited to be partnering with AFI. This will be different from our event on Martha’s Vineyard, because it’s not going to be six days and sixty-five films. It’s four days with more discussions and more topical conversations with people of note. We’ll have a Color of Politics panel, Color of Media panel, Color of Inclusion panel, putting a brain trust together to talk about these things not to pontificate on how fabulous they are, but solutions and what we can do to make it better for people of color. We’re going to show films as well and have discussions around them. The website is www.colorofconversation.com and it will be live on Black Friday. We’re still scoring films for it. It will be small and grow organically like the vineyard. We have huge hopes for it.

Monarch magazine: The Color of Conversation… will this be a series? And if so, how often will it happen?

FLOYD RANCE: It will be once a year for now at AFI. We did this in New York for a couple of years with Macy’s and with CBS as well… on a smaller scale. Everyone can’t attend MVAAFF because of the housing situation or scheduling. So this is a great way for folks to attend something like this. There’s plenty of housing in Silver Spring, food, culture and a different time of year. We hope to see everyone in Silver Spring, Maryland in June.

Monarch magazine: The Festival will support the creation and advancement of innovative and artistic cinematic works from both emerging and seasoned filmmakers of color. The Festival seeks to stimulate an interest and appreciation of film. Please visit www.mvaaff.com to check out the itinerary and the lineup of films.