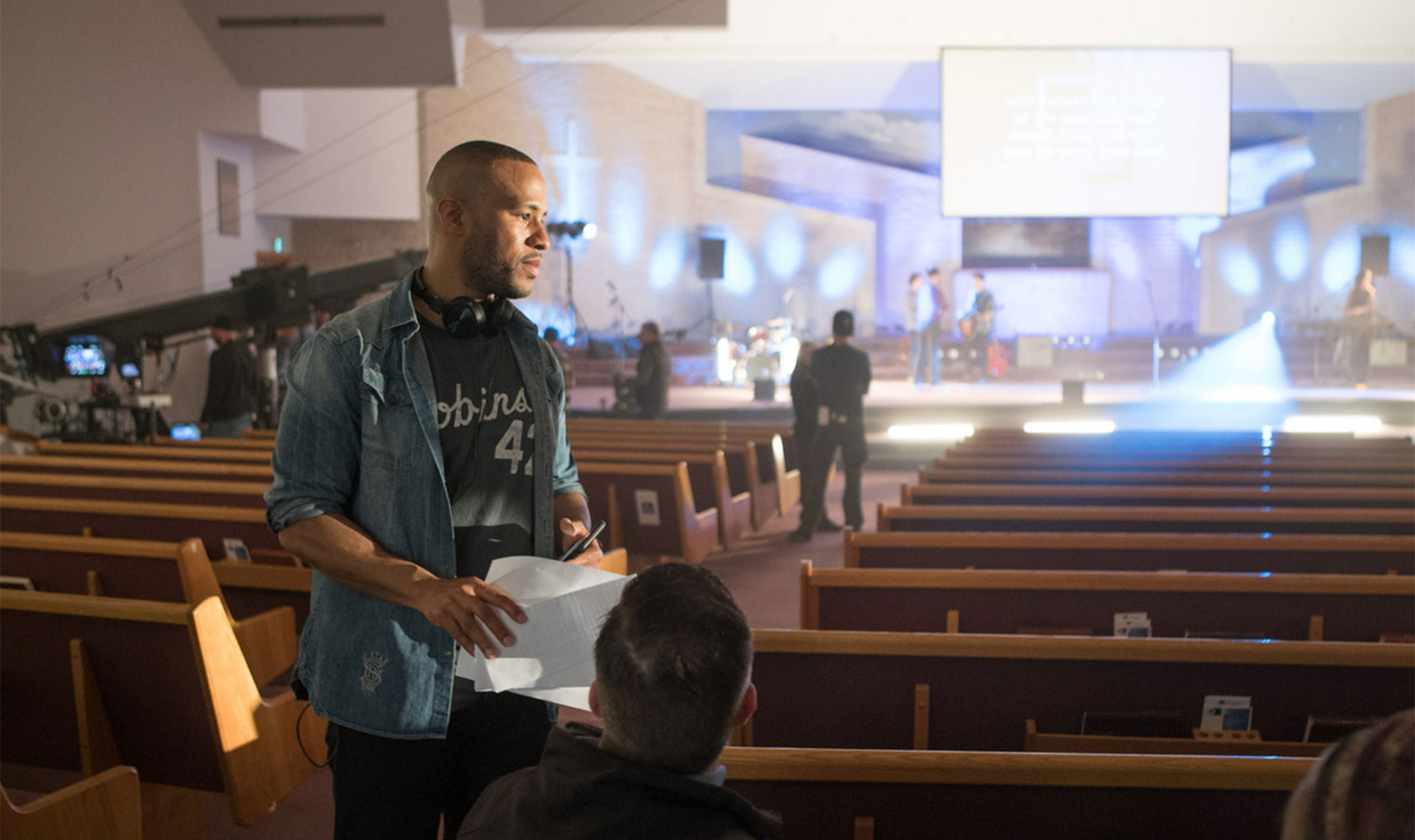 Award-winning filmmaker, TV producer, and best-selling author DeVon Franklin is the ultimate multi-hyphenate. DeVon has quickly become a force in the media as well as a leading authority on faith, spiritual wellness, and personal development. Oprah Winfrey has called him “a bona fide dynamo…a different kind of spiritual teacher for our times.” DeVon serves as president and CEO of Franklin Entertainment, a dynamic multimedia entertainment company with a first-look film deal at 20th Century Fox. As a filmmaker, he is producing the inspirational film Breakthrough, based on the true story of one mother’s unfaltering love in the face of impossible odds. Chrissy Metz from This Is Us stars as Joyce Smith, a faithful mother whose fourteen-year-old son drowns in a lake. The mother will not accept the outcome, and she prays for him to come back from the brink of death and be healed. DeVon Franklin brings this amazing true story to life through a star-studded cast that includes Mike Colter from Luke Cage fame, as well as Hollywood veteran Dennis Haysbert.

Monarch Magazine: Who is DeVon Franklin and what’s most important to you right now, at this point in your life?

Devon Franklin: Whoa, right now I am a producer—working on opening the film called Breakthrough—and I am excited about it. It comes out Wednesday, April 17th, just in time for Easter. And I’m just really excited about the opportunity to produce uplifting content for the world and using entertainment as a way to inspire people. I believe my new film Breakthrough, which is a true story of a mother who prays her son back to life after he died falling through a frozen lake, is the type of story that can do that.

Monarch Magazine: When did you discover that you wanted to be a filmmaker and creative?

Devon Franklin: I knew that I really wanted to do this when I was a kid. I was always inspired by entertainment. Just always blown away by just the images and imagination required to make film and television shows. And so I was excited from day one to do it. And just a matter of taking time living life and putting in my time in the industry in order to position myself to do it. But this dream started when I was kid.

Monarch Magazine: Can you remember the first film you ever did and how it made you feel to do it?

Devon Franklin: The first project I ever worked on was Be Cool, which was when I was an executive at MGM, and it was great. I loved the process. I loved being on set. I loved interacting with the talent. It was amazing. I still love the process of making movies—so that never gets old. It’s just still magical and pretty incredible.

Monarch Magazine: Who have been some of your greatest influences throughout your career?

Devon Franklin: You know, one of the greatest influences in my career would be Will Smith. I started as an intern for him and then worked with him when I was an executive at Sony. I’ve learned so much from him, for sure. Definitely my aunts, my mother. My grandmother had seven sisters and I’m still close to all of them. They’ve certainly been mentors. My mother’s been a mentor. Oprah has been a mentor. And so it’s just been a blessing to have an embarrassment of mentor riches, so to speak. And I treasure every one of them.

Monarch Magazine: Why do you think it’s so important to have such a strong support system? Because I know when people first enter the industry, they may find it hard to find the type of support they need to really be successful.

Devon Franklin: Because I don’t think you can actually be successful long-term without it. Everybody needs to be mentored by somebody. There is no one who has been successful long-term, I would argue, that doesn’t have at least one mentor who can help them navigate the ins and outs of success. It’s so important because there’s a lot of things you don’t know. And a lot of things we don’t know. So, you need a mentor to help guide the way and who can help point us in the right direction.

Monarch Magazine: Okay, so I want to get into talking about the new movie, Breakthrough. What made you decide on this project?

Devon Franklin: You know what, I heard the story. I was promoting Miracles in Heaven, which is a movie I produced. And I met the family, the real family that this even happened to. And when I heard Joyce talk about the fact that she prayed her son back to life after he died falling through a frozen lake, I just knew I had to tell this story. And ever since then, the moment I heard it, to this day, to this moment, it resonated with me and it continues to resonate with me.

Monarch Magazine: And I know I said it before, but you can really see the power in this story through watching the film. So how is this film different from the other films you have produced?

Devon Franklin: Well, it’s a different story. It’s a totally different story. It is its own true story. And I think in that is the difference. And when people see this story in the medical records—“patient dead” and “patient’s mother prayed patient back to life”—it is a miraculous true story that is going to blow each and every person who sees it away. And I just cannot wait for people to see this film when it comes out, Wednesday, April 17th, just in time for Easter.

Monarch Magazine: Yeah, that’s right on time. I know it’s going to be packed out, sold out. This is going to be a truly impactful film. And this leads into the next question. How effective do you believe your efforts are to spread the Gospel through entertainment? Devon Franklin: I guess it comes down to, what is the definition of effective? I think that we never really know the impact that anything that we do really has because it resonates with people at different times and spaces. So sometimes, I would argue, that the success at the box office is an indicator of what’s effective. So I would absolutely look at that as a beginning indicator, but also the testimonies that come out of it. How people are being moved and what people are saying. I can tell you the response that people have had so far to this movie, you know I’ve been doing a lot of early screenings, has been amazing. It is absolutely amazing to see what people say about this film, and it’s transforming lives. So, you know, I do think that it is an effective tool, but again I think that effectiveness has to be measured over time.

Monarch Magazine: One of the things I enjoyed seeing in the film is to see how this one particular story affected so many other lives. And there were so many other faith levels in there. So to see this one story and how it transformed so many. And there were people of great faith, who in some ways were still challenged, so why was important for you to be able to demonstrate that in this film as you told this story?

Devon Franklin: Because it’s true. Every person of faith struggles with their faith. And we just wanted to portray that honestly. See, I don’t believe in these portrayals that people of faith don’t struggle and don’t have any flaws. It’s just not real. And so, we wanted to make a movie that was real. And I think the reason people are responding to the movie the way they are responding is because they find the experience we’re portraying on screen to be very real.

Monarch Magazine: What’s the general message you hope that people walk away with after seeing Breakthrough?

Devon Franklin: The general message is all things are possible to those who believe. And so, I want people to walk out the theater feeling inspired, speaking life—remembering that love wins. If people can walk out of the theater with that, then I think I’ll be doing good. Monarch Magazine: You worked with some awesome actors in the film too. And one of them is Dennis Haysbert. He is obviously a veteran actor, so what was it like working with him?

Devon Franklin: Oh, my goodness. Dennis Haysbert is just a legend. I love him dearly. His performance in the movie, I mean was just in Oakland the other night doing a screening, and the moment he comes on the scene as a doctor you just believe him. Aw man, I mean I could just watch his scenes over and over and over again because he just so believable. His voice, his depth, his soul, he brings so much to this film. And we were just blessed to be able to get him. Every scene that he’s in resonates.

Monarch Magazine: What was the process like choosing the right actors for this film?

Devon Franklin: You know every casting process, is a process. Where you’ve going about trying to find the right people for the right moments. And the thing that I love about this particular story is that all the right people fell into place. And it all started with getting Chrissy Metz. And once she was on board, we were able to put the rest of the pieces together. And everyone who is in this movie, from Dennis Haysbert to Josh Lucas to Topher Grace and everyone in between, they come to the film because they are the right people for the job, and they are also personally connected to it. At the end of the movie, you get to a moment where the actors are right up next to the real people and it’s amazing to see how close they are.

Monarch Magazine: Can you talk a little about how this film affected the actors, being on set? How didyou see this film affecting them as they were portraying the different parts?

Devon Franklin: You know, I think, from the stories they all shared, I think they were all really moved by the real story and really moved by the real people. This is one of those things, where this is more than just a movie. It’s really an experience and I think it’s amazing to see how important that is. That when you’re an actor and obviously I’m married to an actor, when you can connect to material beyond “I’m just showing up for a job,” and it really resonates with you personally, that really makes all the difference in the world. And I think that’s the same experience all theother actors had when they did Breakthrough.

Monarch Magazine: You also worked with Mike Colter on this project. What was it like to work with him?

Devon Franklin: You know, listen, Mike Colter is my brother. He’s amazing and I love him dearly. His performance as Tommy Shine is so powerful. I mean seriously. It just, man, he just brings so much heart and soul to the role of Tommy. And I think really people are coming to learn how gifted he is and think that Breakthrough is going to show the power of his talent in a way that people have not seen before.

Monarch Magazine: Thank you so much for taking this time to do the interview. We truly appreciate it.

Devon Franklin: Absolutely! Always a pleasure talking to you.